How technology is changing the educational system.

Why the traditional education system doesn’t fit in the new model.

The industrialization era that got started in the 18th century doesn’t adapt anymore to our current world governed by virtual worlds, ever-changing environment and the recognition of human emotions as the foundations of our decision process.  Instead technology is setting up a scene characterized by horizontal structures and collaborative thinking that is re-shaping the way we teach our children.

The adoption of computers and the Internet by the vast majority of population as the common communication system has created a new socio-economic system without precedent. This system is characterised by social interaction, collaborative thinking, multimedia content and a great deal of creativity that is demanded from the individual.  This barely fits in a system based on the individual effort, pyramidal structures and a passive role performed by the student

What challenges is Education facing.

One of the challenges educational systems are required to face is the need of individuals to discover and train the so-called ‘soft skills’.  Socialisation, communication, language, and in short, all those abilities that help individuals work in groups. Technology has generated these needs over the last 15 years.

Creativity is being a highly appreciated skill that doesn’t belong to artists anymore, but instead is recognized in every individual’s ability to think ‘out of the box’ and to provide solutions to any kind of problem. Computers are able to simulate thousands of situations, and to do calculations in much less time than a human being, but what they can’t do until now, is being creative, and so far, they they can’t make decisions either. This is gap currently experimented by traditional systems.

This means that educational systems would likely evolve in a way that teach these new skills to children. They will teach skills as the ability to visualise, and the ability to represent complex concepts into visual diagrams that facilitates memorisation and communication to others.

The role of  new media in the educational process

Technology is not only affecting the content of the education that children receive, but also the quality of it. Traditionally education materials were basically books, notepads and pencils. Today we need to provide children with computers, software, visuals; interactive devices that adapt to the real work kids will face tomorrow.

It’s been proven that we learn better with content that incorporates some kind of emotional content. That’s why any audiovisual material has more possibilities to be memorable.  Creating  educational content that makes children create something out of it would be much more efficient way of learning than memorising through repetition.

One example of this process has been enclosed in an App released by the artist Bjork. The App depicts a galaxy. Each song is a stars’ system that is part of this  ‘mother-galaxy’. 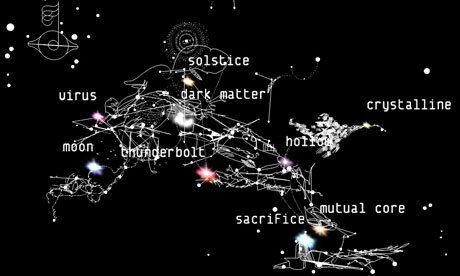 Each song is an app itself and it is interactive. They can contain games, recording and manipulating song features, and even more, one of the songs, is actually a musical instrument.
But what makes this work excel is the fact that the artist is calling the user’s creativity. Her songs no longer belong to her; each user can make a version of them, and of course, can share them with others.
The difference is that the artist is offering not music, but an experience.  And actually the aim of this work was to be an educational tool for children to learn music. This could be a very accurate antecedent of what education might evolve to.

The new model provided by Technology

This example depicts very well a process we are witnessing nowadays. We are no longer passive spectators that swallow information, but we are the creators of the information we receive.
We could make a guess and visualise where the education system would evolve quite soon: into an audiovisual, emotional and creative content, where maybe children will no longer be grouped by ages, but skills, and they will not need to memorised senseless concepts but create ways of understanding knowledge and communicate their own concepts to others.

Collaborative thinking can’t be associated with tests (and don’t cheat) systems, but instead, with a truly utilisation of knowledge, which encloses not only understanding and learning information, but also the ability to engage others to create something new out of that information.